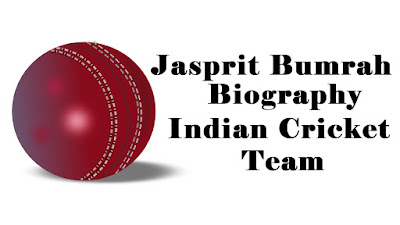 So, today we going to show you, Jasprit Bumrah biography and his successful journey story.

Jasprit Bumrah was born on 6 December 1993 in Ahmedabad, India. His father’s name is Jasbir Sing and by profession, he was a businessman and mother’s name is Daljit Kaur who was a Principal. They are two siblings as he has a sister name Juhika Bumrah who is a Teacher.
In childhood, Bumrah likes to play sports and he like cricket most. And he was something different from other boys like every player like batting first but Bumrah like bowling.
Since his childhood, he had not interested in education. However, he started his education at Nirman High School in Ahmedabad.
When Bumrah was 7 years old, his father died for a serious illness. For this accident, his mother and his younger sister also suffered a lot. Very soon, his mother handled herself and moved on.
When Bumrah was 14 years old, he decided that he make a career in cricket. But his mother did not agree with this decision but to see Bumrah confidence and performance she supported her son. Then he selected in MRF Pace Foundation to see his performance in bowling.
[Note: MRF Pace Foundation based in Chennai and it is a special coaching center for training fast bowlers. Where many experts give training the bowlers.]
Here Bumrah learns and improves his bowling ability. Then on October 2013, he got a chance to play in Gujarat U-19 team. And in the first match, he got 7 wickets and later he selected in Syed Mushtaq Ali Trophy. And here, to see his performance, he selected on Mumbai Indians team in IPL. In this way, he made the first debut in the IPL, when he was 19 years old. And in the IPL he took 3 wickets against RCB. Then the next year, he plays in the IPL second time.
On 27 January 2016, Jasprit got an opportunity to play in the Indian Cricket Team in T-20 match. Then he successfully gets a place in the team by his blowing performance. Then he got a chance in the ODI match.
In this way, Jasprit Bumrah successfully makes a career in the Indian Cricket Team.

Some Amazing Facts Of Jasprit Bumrah

Farther, Jasprit will play more and we see his amazing performance. However, in this article, we try to show you Jasprit Bumrah biography and his success story. If you like and enjoy this post then kindly give it a share also follow us in our Facebook Page.
Now I want to hear from you:
Are you a great fan of Jasprit Bumrah? Let me know by leaving a quick comment. Lastly, thanks for visiting our website.