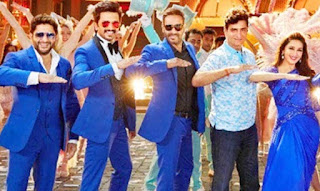 Total Dhamaal is the third movie of Dhamaal and here many new actors playing a role. For example, you can see Anil Kapoor, Madhur Dixit.
The film Total Dhamaal is steered by Indra Kumar. Interestingly, one of the most popular Madhuri and Anil have reunited after 19 years for Total Dhamaal adventure comedy film.
As you know Dhamaal was a great comedy cinema and now Total Dhamaal is also a great one. Now Total Dhamaal is not released in the holiday. But on the first day (Friday), it earns Rs 16.50 crore.
Taran Adarsh also tweets on twitter about this topic.